It is Too Late to Mail! Return Your Ballot to an Official Ballot Drop Site.

END_OF_DOCUMENT_TOKEN_TO_BE_REPLACED

Thursday, January 18 is the last day to safely mail ballots: Voters can get help voting or pick up a replacement ballot at two locations in Multnomah County.

Thursday, January 18 is the last day for voters to safely mail their ballot for the Special Election onTuesday, January 23. Ballots can be mailed with one first class stamp. Voters are encouraged to return ballots promptly because of the possibility of inclement winter weather.

If your ballot hasn’t arrived in the mail please give your Multnomah County Elections office a call. Take a moment out of your daily routine to #pawstovote – Official Ballot Drop Box Video (30 secs).

All Multnomah County registered voters should have received their ballots by now. 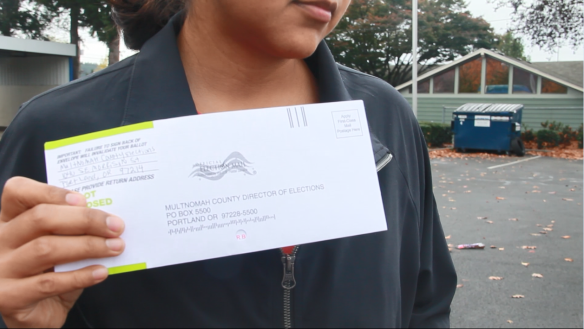 Multnomah County Elections says all registered voters should have received their ballots by now. Any Multnomah County voter who has not received a ballot for the November 8 general election by Thursday, October 27 should call the county elections office at 503-988-3720.

Voters should use a blue or black ink ball point pen when marking their ballots. Felt tip pens and markers can bleed through the paper and cause unintended marks on the opposite side of the ballot.

Multnomah County Elections provides an interpreter, free of charge to anyone who needs help voting in a language other than English. Additional voting and elections information in nine languages is online at multco.us/education-and-outreach/language-access-voters-needing-interpretation.

Voted ballots for the November 8 general election must be received by 8:00 PM, November 8. For more information about the election, please visit www.mcelections.org.

This release can also be viewed in Spanish, Russian, Vietnamese, Chinese and on the Multnomah County website.

All meetings held virtually via Zoom until further notice.  For meeting invitation information, email us at brentwood.darlington@gmail.com or join our official Facebook Group.